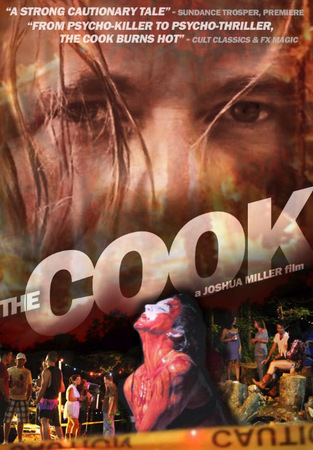 A young TV star and his pals trek off into the wilds of an abandoned park to hold a memorial party for a deceased friend. Well wouldn’t you know it; a bizarre ass drug addled psycho who decides to murderize our goofy gang one by one after they traipse into his lab. Such is the plot for off-kilter slasherific shocker THE COOK from Brain Damage Films.

Right off the bat you can tell that THE COOK isn’t going to set the world alight with it’s blazing originality; attractive young folk enter a secluded area and get royally fucked up…a classic since 1980 (and yeah, yeah…I know there were proto slashers well before; but ol’ FRIDAY THE 13TH was the one that made it “a thing”).

So what does THE COOK do to set it head and shoulders above the pack? Well the answer to that is the titular killer. The Cook is some sort of appointed punisher of the wicked and he is out of his skull on meth as he goes about his horror biz resulting in some rather nifty hallucinogenic ass-foolery. It all adds an air of at least an attempt at providing something left of the norm.

But, as always, all isn’t blood and roses with THE COOK. For starters, the acting in this thing is absolutely atrocious. I can appreciate working with friends or giving folks a shot…but this is a bit much (and you know I’m a forgiving mother fucker). Also, the sound mix leaves a bit to be desired as background noises get distracting AF (I’m pretty sure most of the audio for this bad boy was recorded live).

If you are a slasher fanatic, this stalk n’ slay foray will likely satisfy, but I doubt it’ll make your top ten of terror.

For more of that groovy ghoulie Daniel XIII, be sure to check out the Garage Cinema podcast!