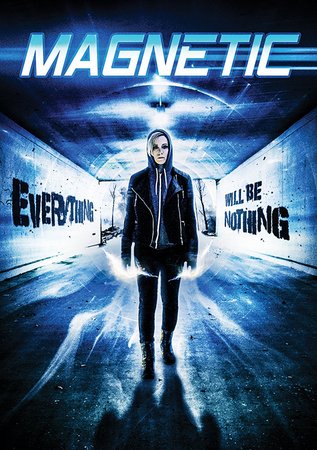 “Holy hell, what was that?!!” That is what I said after viewing MAGNETIC a film from the fangtastic film making duo Sophia Cacciola and Michael J. Epstein; the crazy cats behind ultra-entertaining vampire romp BLOOD OF THE TRIBADES. I really can’t wait to lay this one on ya my creeps…

The best way I can get you into the mindset of MAGNETIC is to say; What if instead of Lewis Carroll, 80’s era Gary Numan wrote Alice in Wonderland on an absinthe binge while covered in magnetic tape surrounded by a complete run of Jack Kirby’s 2001 comics. Sounds strange right? Well, the movie is 100 times more insane-o in the most f’n glorious way possible!

Check out the synopsis to get a hint of what I mean; Lookin’ for a fresh start, Alice (Mortis) returns to her bucolic hometown and takes a job in an office located hundreds of feet below a barn surrounded by sheep. Each day she must follow a list of cryptic commands, and perform the duty of calling folks and informing them of the death of their loved ones; day in and day out. Before long she begins receiving messages that all is not as it seems which brings her in contact with a cult of black clad women that worship Ra. Sound strange? Well I haven’t even mentioned the apocalyptic solar event threatening the planet, Alice’s dreams of spider women and animal headed beings, and wonky goings-on in the fabric of space and time!

MAGNETIC is what low budget genre film making should be; unique, challenging, and over flowing with big ideas, money limitations be damned. For the same cost as your now bog-standard 80’s slasher throwback, these folks have created an entire world unto its own, populated by bizarre characters, a near fetishistic infatuation with outdated technology, and rad concepts the likes of which you have never seen before (with a tip of the hat to the aforementioned Mr. Carroll).

And as great as the flick is; there a couple of bonus features on this release to sweeten the pot so to speak. First up is an ultra-informative commentary featuring film makers Sophia Cacciola and Michael J. Epstein as well as actor Allix Mortis. It’s an engaging conversation filled with anecdotes and a real sense of what it’s like to bring such an ambitious project to life from conception to execution. Also included is a cool behind the scenes featurette that gives a nice “fly on the wall” view of the film’s production.

For more of that groovy ghoulie Daniel XIII, be sure to check out the Garage Cinema podcast!